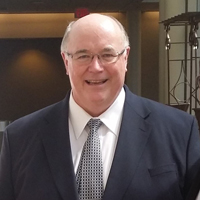 The Governor’s International Team does the important work of creating and maintaining some of Oklahoma’s significant international relationships, particularly with the consular corps.  Dr. Henneberry has been a faculty member in the Department of Agricultural Economics at Oklahoma State University since 1984.  He served 10 years as Assistant Dean for International Agricultural Programs and 8 years as Associate Vice-President for the Division of International Studies and Outreach.  In those roles, he worked with many groups visiting the state to learn more about the educational and research opportunities available here.  The importance of relationship building as the basis for new economic opportunities became a focal point of his professional activities.

Dr. Henneberry has experience in 65 countries.  During the Fall semesters of 2018 and 2019 he was a visiting Professor with International College Beijing at China Agricultural University. In 2017 he was awarded the Ohtli Award by the Government of Mexico for his work with Mexican citizens in the United States.  He is fluent in Spanish and has worked closely with academic and agricultural interests in Mexico, predominantly in Chihuahua and Puebla, since the 1970’s.  At Oklahoma State University, he was an advisor to many international students and guided them through their experience of living in the United States.

The future of the world is changing, and those areas that benefit from it will be the ones that succeed at internationalization.  The United States needs to address its declining educational progress and shifting professional values with the strategies and new concepts it can learn from internationalization.  Many other countries have completely caught up with, and in some cases surpassed, the economic and educational progress made in the United States.  The biggest domestic issues like opioid addiction, unemployment, medical insurance and generational change can all be better addressed from a policy perspective that is broadened and enhanced by globalization.

Dr. David M. Henneberry was appointed as the Associate Vice President of the Division of International Studies and Outreach (IS&O) at Oklahoma State University in April 2011. He had served in the position in an interim capacity since August of 2010.

Henneberry began his career at Oklahoma State University in 1984 as an assistant professor in international trade eventually serving as a full professor with tenure until 1999.  From 1999 to 2011, Henneberry served as the Director of International Agriculture Programs in the Division of Agricultural Sciences and Natural Resources (DASNR) from September 1999.

During recent years, there were about 180 international trips conducted by DASNR faculty in addition to 19 study abroad courses involving about 165 students. Major projects range from a doctoral program taught on site in Mexico to an agricultural education cohort doctoral program in Thailand.

Dr. Henneberry has international experience in 65 countries representing all major geographic areas. He is fluent in Spanish and has spent a total of over three years in Latin America on short and long term projects. Henneberry completed his Bachelor and Master of Science Degrees at the University of Minnesota and his Master of Arts and Doctor of Philosophy degrees at the University of Wisconsin-Madison in the field of Agricultural Economics. The educational program of one undergraduate degree and three graduate degrees spanned a ten year period from 1974 through 1984.